Most of the temples were built by the Chandela dynasty between 950 and 1050 CE. They once covered an area of just over seven miles with 85 temples, but now only 25 spread out over four miles remain. The temples were in active use through the end of 12th century, but that came to an end in the 13th century when the Chandela kingdom was seized by the army of Delhi Sultanate. The area where the temples resided remained in Muslim control through the 18th century. During this time period the temples were subject to abuse, destruction and neglect. Over the centuries, due to Khajuraho’s remoteness, the jungle reclaimed the area and the temples were mostly forgotten. In the 1830s the temples were rediscovered by British surveyor T.S. Burt with the help of locals.

The temples are most well known for their erotically carved sculptures, but upon arrival it becomes more of a Where’s Waldo activity to find these salacious scenes. Less than 10% of the sculptures are erotic in nature and they are known as Kama scenes. Kama literally means “desire, wish, longing” and is one of the four goals of human life in Hindu traditions; it is considered an essential human pursuit in balance with the other three goals: Dharma, Artha and Moksha. All goals of human life are represented at the Khajuraho Temples along with scenes of day to day life of medieval India, such as farming, playing music, and making pottery. It’s possible that the Kama scenes are tantric in nature but more likely it’s an homage to human life and actively.
Whether one comes to peek at the adult content, admire the incredible art and engineering, or stroll around the lush grounds, it’s well worth the time to make the journey. 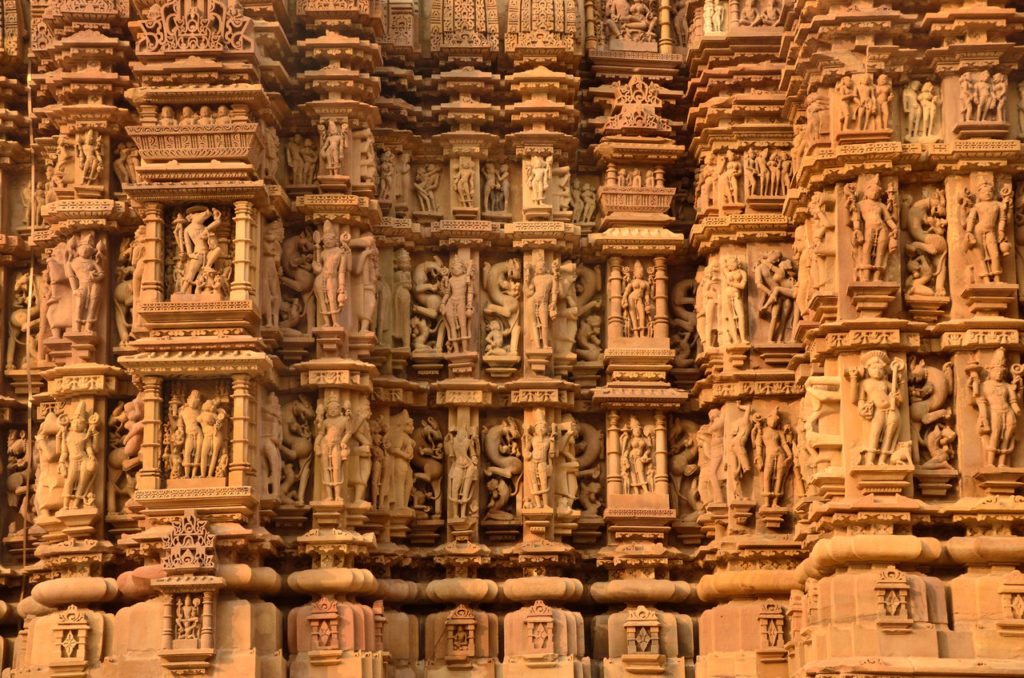 The famous Khajuraho temples of Madhya Pradesh have been hogging the limelight every now and then for various reasons. And the most popular psyche is that many find the carvings on the Khajuraho temples as offensive pornographic scenes. Perhaps, in all this, we tend to miss the most important point, i.e., the basic purpose of building these temples. This UNESCO World Heritage site is far from being a petty representation of the Kama Sutra. The temples here, in fact, illustrate the idea of life that engaged aesthetic objects to create something inspirational.

Reaching this place of beautiful temples is one of easiest thing to do as there are direct flights from capital of India – Delhi. All the major carriers like JetLite, Air India, Jet Konnect, Jet Airways, Indian Airlines, Indigo, Spicejet take you there.

Khajuraho has only one airport for domestic flights. As of now there are no direct International flights. This airport is integrated with all international facilities, duty free shopping, medical aid and ready – to – eat caffeteria.

Most nearby bus stand is Chhatarpur Bus Stand to airport. Its around 29 miles from airport. However, its good to take a taxi rather then a bus.

Most of the major railway stations of India reach Khajuraho either directly or indirectly. From New Delhi there are two direct train which take approximately 10 hrs to reach their destination. Direct trains are laso from Varanasi and Udaipur